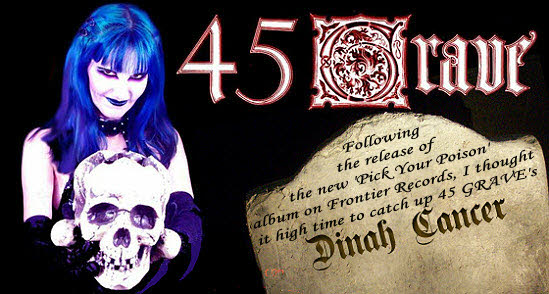 ..45 GRAVE recently released its first new album in neigh-on 20 years, Pick Your Poison. One of the most notable aspects of the album is the inclusion of original ADOLESCENTS guitarist, Frank Agnew. Was he a friend from the bands original days and how did he come to join 45 GRAVE?
..Dinah) Frank and I met each other in late 79 - 80. We played a lot sharing the stage together with our projects. We hung out at the Black Hole, played music and did this til 84' when we went our own ways with families and such. About three years ago Frank got in contact with me and we started up right where we left off. We started to talk again and I brought up the idea of looking for different guitarist to work with. He said he knew of someone that would be able to do it,which turned out to be him and I was thrilled. I had been searching for someone to work with. He joined us, on stage for the Night Of The Demons party, 2010. I was excited when Frank stayed on for he would be one of three choices for doing the songs.
It took some time to get the set down. We started to discuss doing a 5 song EP... A fan had asked the question of how Dinah Cancer was inspired. Taking that, we went ahead and started tracking in June 2011. The energy that was in the studio started to bring out the new songs. Frank and I sat down and started to go over what we liked best as we grew up, as our backrounds and tastes were very similar. So, we went with the best genres: Country, Punk, Metal and more are all in Pick Your Poison'.

..What has Frank brought to the band that was absent before? Tell us about the current 45 GRAVE line-up.
..Dinah) The new incarnation of 45 GRAVE:
Dinah Cancer: Lead Vocals. Original member of 45 GRAVE. Played in previous projects: 45 GRAVE CASTRATION SQUAD, VOX POP, NERVOUS GENDER, CHRISTIAN DEATH, PENIS FLYTRAP, DINAH CANCER AND THE GRAVEROBBERS. Still doing what she does best.
Frank Agnew: Guitar, keyboards, vocals. Frank played in THE ADOLESCENTS, TSOL, LEGAL WEAPON and other OC Punk bands back in the early 80s. I played with Frank several times back in the day, with our respective bands, and was happy when he did a few guests spots on guitar for Night of the Demons movie party. Having grown up in the same era, he shares the same feelings on recording music as me and lent his playing style as well as his production talents to the new music of 45 GRAVE. Whats more, Frank is a guitar player that can take Cutlers leads and keeps it in the same vein
Brandden Blackwell: Bass, Vocals. Played for years in some Long Beach Punk bands including LIQUID POPE and D'MAGG'S. Brandden has been playing with me for around three years now. Brandden lends his bass talents and has earned his fit with the band. He jumps in and works fast with the newer music that we are churning out. He brings a heavy end to the rhythm section.
Tom Coyne: Drums, his past projects have included FRANKENSTEIN and THE LAST DANCE. Tom studied at MI for years and his playing is flawless. To work with Tom is a treat. A true percussion genius and takes to the new music like it was nothing.
Mark Bolton: Guitar/ co producer/ engineer. Mark joins us for live shows since he was there thru each stage of the recording process as our engineer and co producer with Frank. To bring everything to the stage, Mark is lending his talents on guitar and will be switching between guitar and keyboards with Frank for the full album effect. 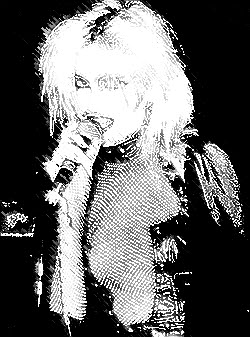 ..Was Frank a key factor in the release of the new album? Im assuming he had a big input into the new material.
..Dinah) A few of the other songs are brand new, that I wrote with Frank. Child Of Fear was a song/ poem, that I wrote also, in the 80s. It never came to light until I started to work with Frank. I could never put music to it. It started as a poem and Frank worked on the music. The song Pick Your Poison was completely written in the studio. Tom and Frank just played it in one take, and then we built it from there. Winds Of Change was another song that never met the right person. A Desert Dream was written by Frank on piano; that was a piece that Frank played for me around the time of him joining the line up. One of the things I enjoy is to watch him play and compose his pieces. Music is very emotional and his song, A Desert Dream, is a very haunting song. A lullaby if you wish to call it. I can close my eyes and see him playing it on piano. A break in the chaos of life and a fine addition to the album. I think Frank put it at the perfect place on the album. I find myself listening to it a lot during the day. We've got a lot great responses about A Desert Dream. In fact, with the whole album. Just something different to think about. Frank adds,"That was written just before I joined 45 GRAVE. To relax, I often sit at the piano and put to music how I'm feeling at that moment and that's what came out. The feel of it was influenced by my love of the music of Ennio Morricone. Lucky 214 is a Rock n Roll song. One of those old Hollywood nights! We'll ask Frank about that. Night of the Demons was written for the movie, Night of the Demons. And Highway 666 was a road song. So these songs were written a few years back when I was writting with L. Ron Jeremy.
It was a great time being in the studio and I can't wait to get back there again. We wanted an album where each song could stand on its own with no filler. An album that tells a story with each song as a backdrop. It was the first time that we worked together as songwriters and we are very pleased with the results. I say Pick your poison, there is something for everyone.

..How do you feel this album compares with previous 45 GRAVE albums and how do you think this is a progression on from those?
..Dinah) Its just evolution. Time to move forward. Two of the songs were written in the mid 80s by the original line-up: Akira and The Sorceress.

..Lyrically the album continues the well-known 45 GRAVE themes of darkness, death etc. What inspires you when it comes to lyrics? Any reason you never write anything political?
..Dinah) Walks, things I see and my beautiful imagination. No, Im not into political stuff.

..The album has been released on Frontier Records. How did you hook up with Lisa and the Frontier crowd?
..Dinah) Frank helped out on that one. Frank played it for Lisa and the rest is history. 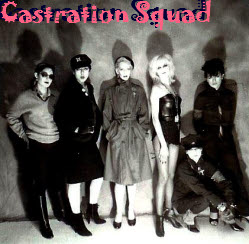 ..Have you been out playing live with this line-up?
..Dinah) Yes, we have and we are currently putting a show together. Plus more videos. Well be ready for tour next year.

..This is probably a question you are often asked, but how did you come up with the 45 GRAVE name?
..Dinah) Off a button from a thirft store. It said Graves 45. So Paul took that and named us 45 GRAVE.

..Reading Alice Bags book, it was interesting to read about your development from Mary Sim, "a young, shy blonde" who was dating GERMS drummer, Don Bolles, into Mary Bat Thing - "a otherworldly beauty with snow-white hair and ivory skin, dressed in a short skirt and billowy scarves." What inspired this dramatic transformation? Bag also talks a lot about the bands dependency on hard drugs - what are your thoughts on that?
..Dinah) At that point I was going into my Hammer bride era. Long dresses and looking like a vampire. But everyone looked dead back then. Yes, drugs were involved but thats the pass and its something I did in my youth. It also lead up to original line-up break up. I love Alice with all my heart. Shes a great friend and maybe Ill have a chance to play with her again

..Quite early in 45 GRAVE's career, it appeared on one of the iconic Punk Rock compilations of the day, Hell Comes To Your House. How did you get involved with that and did you ever consider it would go on to be one of the defining albums of that era?
..Dinah) At the time comps were coming out so we were added to HCTYH. Just jumping on comps. It was a fun time. 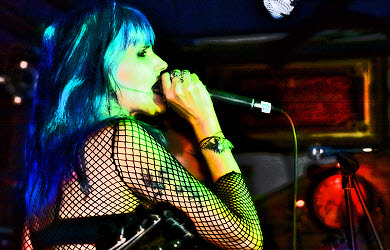 ..You were also involved on the soundtrack of the 1985 film Return Of The Living Dead. How did that come about? Your song Partytime has quite a big role - if I recall it was even used in the films trailer. Was your involvement in the film based purely on that song - especially in light as (I think) you re-recorded it for its special role of Zombie version.
..Dinah) That was a great project to be involved with We were given the rough cut print to write around the movie. Most of the shooting was done and being edited. There was no sound, just the images and barely audible talking. Extreme rouge cuts.
But Paul and I did rewrite the lyrics for the movie, Return Of The Living Dead. Well, they loved the music.
The movie company did not like my lyrics to Partytime. The record label asked if I could change the content of Partytime for the soundtrack. So we came up with the Zombie Version. The child abuse story didn't sit well with them. But then record labels never read anything. It's based on a story that I read in a true crime mag. The insanity and cruelty went on. So that Partytime is about child abuse but it is written as a tribute to the little girl, Sabine. The song is about what her family did to her and how she didn't deserve it. So, I hope where she is right now there is a never ending birthday party for her. Always having fun. And at peace.
In fact, Partytime has four sets of lyrics. These were made for the movie. We also did the soundtrack for the movie Night Of The Demons in 2009.

..Its clear that the genre of Horror plays a major part in your work, along with sex and death. What is the attraction to these essentially taboo subjects that so appeals to you?
..Dinah) Ive always been a morbid girl. And its the area that I write well about.

..I assume you are still based in LA? What keeps you in the city?
..Dinah) My children keep me here so they can finish school and then maybe Ill move on

..If you could change one thing about American culture/ society - what would it be and why?
..Dinah) Have an America that will take care of their own.

..Whats next for 45 GRAVE? Does this new album signal a long-term return to music?
..Dinah) Yes, we are not going away