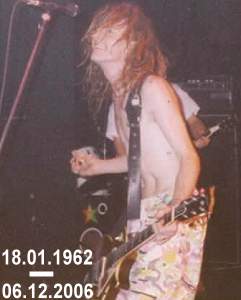 How often do things of a more negative note hit at Christmas? I heard today that Darren Brown, more commonly known to us in the Punk world as Wiz, died on 6 December 2006 as the result of a blood clot in the brain. He died at St Georges Hospital in Tooting, South London with his closest friends and family at his bedside. He was only 44 and was taken ill at a band rehearsal earlier the same week.
I recall seeing Wiz's first band, MEGA CITY FOUR many, many times. The band was a staple for any Punk in the late 80s; a band that just seemed to constantly tour and play live. The shows were always energetic, as was the band's recorded output. By the time the band had disbanded in 1996, I had lost a bit of interest I have to confess - probably more than a bit if I am honest. The records had lost their youthful adrenal surge and urgency, but live the band still cut it with the very best.
Wiz then went on to form SERPICO and, finally, IPANEMA which totally revived my interest in the man and his music. At the time of his passing, he had just finished writing the new IPANEMA album and had returned from a US Tour.
I spoke to the man many times, but one of the most memorable times was at a show in London by Bob Mould's SUGAR - it may even have been SUGAR's first UK show. MEGA CITY FOUR hadn't played Ipswich for a while, so I went and asked him when the next show would be. Wiz was amazed that someone about to see Bob Mould could even contemplate a band like MEGA CITY FOUR - his band - let alone his band performing in their hometown!! But, he promised a show would occur soon - and it did!
My condolences go out to all his family and friends.
If anyone wants to sign a condolence book, or access more information, go to www.megacityfour.co.uk