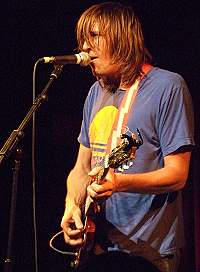 One of the most enjoyable aspects of gig going in the UK is the ready availability of good Guinness. The pub we visited before heading to the venue - The Hole In The Wall I think it was - was no exception. The decidedly choice quality of the Guinness, and some even better conversation, prevented us seeing the start of the fella who opened the event. He was dreary to the point of sobriety, mumbled what few words were said and had the general personality of a postage stamp. I heard hints of Al Stewart in what he did - that's to say contemporary folk stylings. The extra Guinness in the pub was certainly the highlight of Mr. Jejune's set.
Is it really SIXTEEN years since THE LEMONHEADS released 'It's A Shame About Ray' and - even more scarily - TWENTY since 'Lick'? Making matters worse, Dando himself is still a good looking dude who no doubt has many millions of gurls swooning over him - not that I am jealous... the bastard.
He doesn't sound much different either - his voice still embodies that blissed out slacker rock sound coupled with an unerring sense of melody and melancholy.
His set kicked of with virtually the entire 'It's A Shame About Ray' album - dunno if he was trying to plug the stella re-issue of the album that Rhino Recs has released (if so, maybe he should have mentioned it?) - and probably to the detriment of the show. 'Confetti' and 'My Drug Buddy' were particularly effective in this format which was not acoustic as such as Dando played his faithful Gibson SG (occasionally with a bit of distortion too) throughout the show. From the '...Ray' blitz we got selected moments from various other LEMONHEADS albums with the most memorable moments being 'Half The Time' from 'Lovey', a stella 'A Circle Of One' from 'Lick' (I kinda recall 'Mallo Cap' getting an airing too - but the Guinness made me a little hazy come the end) and an upbeat take on the single 'Into Your Arms'. 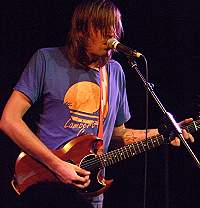 As great as the '...Ray' stuff was, Dando had played most of his trump cards way too early and for the final 30 minutes of his set he just seemed to drone on in the same monotone style that we had already heard - but minus the quality. He himself said very little between songs and what was said was the archetypal slacker mumble. There was some kinda bizarre spoken reference to, "old Punk bands ADVERTS, USERS and RUTS". May be he was trying to appear 'cool' to the amassed Indie throng - but let's be honest - mentioning the RUTS is not being overly elitist or eclectic!
Eventually Dando wandered off with an apathy that mirrored the previous 30 minutes of sounds, the house lights came on and off we headed home pretty much nonplussed by Dando's attempt to be Paul Westerberg-lite. Post-show conversation revealed that the previous night's show in Norwich was not as good as this was - shit - was that the yearly Insomniac's outing??