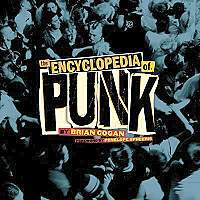 ENCYCLOPEDIA OF PUNK - Brian Cogan (404 pages)
Let it be said now, I think Brian Cogan is a very brave man. From memory, no other book has attempted to tackle Punk Rock in its entirety and be objective and informative about each entry. This massive, LP sized book moves from late 60s pre-Punk to the 2008 scene, stopping off at every stage in between, be it ‘77, Anarcho, USHC, Emo - the whole lot. Of course, penning such a massive, sprawling tome that fails to focus on any specific sub-genre of Punk, is going to criticised; some bands will be omitted, others included and various facts will be incorrect - and that’s all true of this.
The positives though, far out weigh any negatives. Firstly, it’s apparent that Brian Cogan (who has apparently been active in the Punk Scene for over 20 years), does enjoy what he is writing about and, generally, gets it correct - his observation about Good Charlotte being phonies is spot on (although suggesting THE FREEZE is a Straight Edge band is woefully far off!). Visually, this is highly stylised with the use of many rare photos making this much more aesthetically pleasing than most other books on Punk Rock of any genre. Cogan delivers his facts in alphabetical order focusing primarily on bands but also including record labels, zines, sub-genres, venues, writers and artists. There are also sub-chapters highlighting politics, sexual orientation, DIY values, drugs, mass media and more, while ‘Decline Of The Western Civilisation’ director, Penelope Spheeris, provides a foreword. In possibly Cogan’s bravest move, his foreword actually attempts to answer the age-old question of what Punk actually IS. He nearly does it too, as he embraces each successive genre and observes how the movement itself has progressed since day one.
The negatives really come down to personal opinion. I personally don’t think the likes of Can and Nico (let alone fucking Ronnie Biggs!) should have been represented. When you consider some of the glaring omissions, it’s even more debatable; some of those missed out include DILLINGER FOUR, BLITZ, ICONS OF FILTH, CRUCIFIX, AMEBIX, ADAM AND THE ANTZ, MOVING TARGETS, SNUFF and PEGBOY. Also, the whole book is very UK/US centred. Australia and Japan get cursory mentions, but continental Europe is ignored so there’s no BGK or RAW POWER while Japan’s GAUZE and GISM are notable by their absence. I could continue, suggesting the inclusion of NAPALM DEATH but not EXTREME NOISE TERROR renders ND’s inclusion superficial, as does the inclusion of Melody Maker but not Sounds or NME. Of course further errors exist (MDC’s Dave Dictor was referred to as Dan Dictor in one section), but generally the negatives are based more on personal opinion than actual criticism of errors or aesthetics.
If you are new to Punk, this could be invaluable as Cogan lists a selected discography of all the bands and its breadth of genres is unmatched. Even for those who have been into Punk for decades will find photos never previously seen and glean odd snippets of info. The book also acts well as a ‘coffee table’ piece. Many who have picked this up here at the House Of Scanner had no knowledge of what Punk is and have been absorbed in the book for an hour or more. It’s a good book to flick through in small doses also.
As stated, Cogan has made a bold move here and on the most part has done an admirable job. The fact the retail price is NOT expensive is another plus - anyone who was thinking of yelling "CASH-IN!!" better think again. (27.06.09)