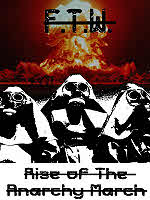 F.T.W.: RISE OF THE ANARCHY MARCH - Russ Lippitt (186 pages, Ravenhawk)
If you will, picture a world some 50 years in the future...
America now consists of 26 sovereign states (aka: sections) with the entire East Coast being Section A: a walled utopia of conservatism, complacency, affluence and martial law. Its citizens are encouraged to denounce possible insurgents who will then be punished via public execution on TV. The first amendment of the new Constitution now states the right to go to church every Sunday, while the possession of art is an arrestable offence. Outside Section A, the ruling New World Order ploughs through the country monopolising and dictating the patrons and sterilizing any opposing thoughts or ideas. Food capsules have become the main source of nutrition and, by default, wealth. The middle class has fallen and government departments provide services only to those who can afford them. Its been decades since the last rainfall and Nukies - the result of The Big One in 2019 and mutilated by years of polluted air - dominate certain areas feeding on and destroying the human race.
This is the society Lippitt has created in this, the first of a planned trilogy. But as with any governing body that suppresses individualism, there is a resistance - The Anarchy March. The AM exists as a covert body, enlisting fighters for its cause slowly and with caution.
The book follows three core members of the AM - Doyle, Darla and Jack - who have a new chemical weapon in the form of a skin-melting toxic gas. They aim to transport it from Section Y (California) to the leader of the AM in Section X (Oregon). Their journey takes them through Section S - Savage Town (Nevada) - where the governor pays the NWO a fee for its compliance in allowing the Section to be a decadent, hedonistic, lawless morass where savage violence, whores, alcohol and insurrection rule. Naturally, this is where the Punk community has gravitated toward. Elsewhere on their journey, they encounter hippie idealism, blissful apathy, religious dogma, conspirators with the NWO, brainwashing, and a visionary soothsayer.
Although fanciful on paper, Lippitts supposition of the future rings with authenticity. He has captured a very realised state of an ever-more corrupt and callous America. Woven into this nightmare vision of the future are subtle references to what is occurring in the world today, suggesting lateral rather than literal thought, yet refraining from being intentionally damning to America per se.
The central characters have a likeable sense of sarcasm about them. Jack in particular possesses a demeanour that could see him erupt at any moment while Doyle has a dominant and distinct dislike for unreasonable, ruthless authority. Through Lippitts narrative, these characters have a life of their own (although a few others do seem slightly clichéd). His narrative also has a vivid realism about it - be it the graphic, stomach-churning violence occurring in Savage Town or the surreal, Stepford-esque homogeneity of suburbia in Section A.
Its hard to avoid drawing parallels between this novel and Orwells 1984; both books display a future of oppression, subservience and constant surveillance juxtaposed against revolution, humanity and hope. Another favourable comparison would be Robert Harris excellent Fatherland as both books tell of a frightening existence where political espionage, torture and state-sanctioned murder are all commonplace.
Thats exalted company for this book - which is only Lippitts second - to be keeping, but one which given the context of the book, is one that is perfectly apt. (28.11.10)