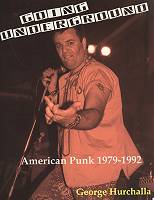 GOING UNDERGROUND: American Punk 1979-1992  George Hurchalla (330 pages)
There have been several books of late focusing on US Punk and, more specifically, US Hardcore. Many have been little more than either researched documents eulogizing the era from a distance, or edited quotes listed one after the other and arranged in relevant chapters by an author who has not so much written a book but edited a book. George Hurchallas Going Underground is different.
From the very outset of the book, you get to know just who George Hurchalla is; his likes, his dislikes, his flamboyancy, his taste in music and his life. While he does quote bands, zinesters and various scenesters, these quotes are collated within a strong, personal narrative. Not only do you read of US Punks progression but also Hurchallas own personal life progression which has not only ran in parallel with Punk but became absorbed within Punk and its culture in general.
Its also clear that Hurchalla has no specific bias for a particular band or label. Hurchalla was, and is, first and foremost a fan and doesnt engage in any tiresome ego-tripping. Sure, the likes of John Stabb (GOVERNMENT ISSUE), Kenny Inouye (MARGINAL MAN) and zinester Jack Rabid in particular get quoted a great deal, but they enhance the narrative and their inclusion certainly does not come over as any form of back-slapping for Hurchallas mates.
And the narrative is the books big asset. Its a concise analysis of Punk and its progression from the original, ground-breaking 70s freak show, through the Hardcore movement of the 80s and ending with a look at Punk in the last decade. Within all of that, you have a chapter on Hurchallas year in Australia, which juxtaposed Punk in Australia with the Punk in the US that Hurchalla was already familiar with. This proved a real highlight for me; the change of location added greater weight to the US chapters and proved that Punk had permeated everywhere whilst retaining its independence and grass roots ethics. Besides, Im always up for reading about Punk in the Antipodes! There are also chapters on Punk on Film and DIY ethics.
Hurchalla having never been based in any of the US Punk hotspots (LA, Boston, NYC, DC etc) is also a positive for the book. Those scenes are well documented and really do not need yet more repetition. Instead, Hurchalla was based predominantly in Florida and Philadelphia and had to search out his music. The fact Hurchalla was open to all forms of Punk Rock  from THE WIPERS to BAD BRAINS; GERMS to GORILLA BISCUITS; BUTTHOLE SURFERS to GREEN DAY  is amply proven as the enthusiasm for the subject literally explodes off the page and is a joy to read. Also, thankfully, he never became territorial about his own scene as those in Boston or DC did.
Visually, there are photos and flyers relating to the bands being written about. Thankfully, these are not the oh-so often seen photos of all the main players. Instead, you get great snaps of the likes of KRAUT, ZERO BOYS, BIG BLACK, CHANNEL 3, TOXIC REASONS, THE FAITH and many more along with the already established names. The photos have not been seen too often  if at all  and add further to the books sense of sincerity and the depths of Hurchallas own research.
Its not all positives though. There are a couple of notable omissions from the narrative, mainly POISON IDEA (which is even more evident in the wake of Pig Champions death) and JAWBREAKER, both of which garner little more than an obligatory mention which, given the influence and impact both bands had, trivializes them. British Punk in the 80s is also rapidly dismissed. Sure, ANTI-NOWHERE LEAGUE, DISORDER and EXPLOITED were tedious rubbish compared with BIG BOYS, TSOL and NAKED RAYGUN, but to tarnish the entire UK scene with the same brush is a tad unjust.
But, any book of this nature  and particularly one based around the authors own opinions and experiences  is bound to have a few negatives; if it did not, it would be trying to appease the masses at the expense of sincerity.
In general, the book is a great read. It has an incredibly accessible narrative and Hurchalla himself comes across as a likeable, informed, witty guy who still holds the basic independent ideology of Punk very much to his heart. I found myself reading huge chunks of it in one go and then going back and picking out certain snippets again. And the mark of any book that documents a time in history is whether it teaches its readers something  and this sure taught me a thing or two and reawakened my memory to many bands that had slipped my mind.
Essential stuff  both for those who lived through the era and for those new to it.