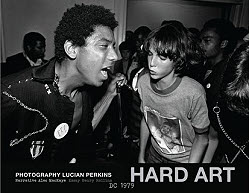 HARD ART: DC 1979 - Lucian Perkins (104 pages, Akashic Books}
We all know that there was some kinda Punk Rock revolution going on in DC in 1979. BAD BRAINS, a quartet of black, African-Americans was cranking out some jams at a pace never previously experienced and, in doing so, arguably gave birth to the nascent hardcore scene that followed. Emphasising this fact were bands like TEEN IDLES, TRENCHMOUTH and the soon-to-be S.O.A. This book features the photography of Lucian Perkins shot at four shows in DIY spaces in DC and includes all of those bands mentioned.
It’s presented in landscape format, wrapped in a solid and stylish hardback binding featuring a young HR busting some chops at the Hard Art Gallery, the venue/ space that gives the book its name.
A foreword is provided by Lely Constantinople. She was hired in 1995 by photographer Lucian Perkins (who, at the time, was photographer for Washington Post) to organise his massive photo collection. Among the collected shots of war and locality based pics, were these bold, impulsive and intense photos. A second foreword is provided by Jayme McLellan who curated an art space in DC. The original intent was for just an exhibition of the photos, and from that, grew this book.
The photographs themselves were shot at Valley Green Housing Complex and Hard Art Gallery in September 1979 with a further two sessions from Madams Organ Artist’s Cooperative in November 1979 and January 1980. Each gig has its own chapter with Alec MacKaye providing an on-the-spot narrative.
The photos are sharply focused (especially given the chaos going on at the gigs), bold in contrast and have a vibrancy and vitality that is lacking in much of today’s digital snaps. The photos from the Valley Green gig are particularly interesting. It was a Rock Against Racism gig and, with the exception of a few young, white Punks, the crowd is predominantly African American (some of a very young age) that look in equal parts bemused or enthralled, apathetic or fervent.
The Hard Art Gallery photos are probably the most stylistic and intriguing. The shots of the crowd members show some individuals having a very finely tuned sense of Punk style (and I don’t mean studs and mohawks) although, expectedly, there are still looks of bemusement on a few faces.
The remaining gigs at Madams Organ, possibly due to the bright white room, seem to lack the cutting edge of the first two sets of photos, but there are a couple of TEEN IDLES photos and the crowd is certainly now an audience of what is now recognised as Punks.
The book closes with an essay from HENRY ROLLINS reliving his youth in DC through TEEN IDLES, and a very welcome index of the photos that puts names (some of which you should know) to the faces.
The DC scene has already spawned two classic books in Dance Of Days and Banned In DC and, while this is an aesthetically suave and visually alluring book, it doesn’t match the standard set by those two books. However, it sits as a very worthy accompaniment to those and another bibliographic addition that emphasises the intensity of what was occurring in the US Capital at that time. (21.04.15)

HARDCORE, PUNK, AND OTHER JUNK: Aggressive Sounds In Contemporary Music - Eric James Abbey and Colin Helb {230 pages, Rowman & Littlefield}
Although I’ve listed only two authors, this is actually a compendium of writings from ten different authors, but those listed in the heading are also the editors. So, we get ten pieces on a range of ‘loud’ music. While it is well written, I have to say I found a number of the pieces to be flat-out boring. I mean, a 20-page analysis of SID VICIOUS’ take on ‘My Way’? I really doubt Sid put too much thought into the ‘Melody, Harmony and Form’ of the song. Or of his performance. Or of his vocal technique. I’m pretty sure that it was just Sid being Sid and making a surprising lasting legacy - which is something that article doesn’t.
Anyway, of the better pieces in the book we get Brian Cogan (author of the Punk Encyclopedia) doing a well-researched and fluid assessment of THROBBING GRISTLE and Helb writes a concise and refreshing piece about Krishna involvement in Hardcore. Elsewhere we get Abbey looking at the Cult of HELLMOUTH and a piece about DROPKICK MURPHYS and their American-Irish hybrid hereditary (which also kinda goes nowhere). The remainder is mainly about Metal, some of which is quite readable, some of it just so analytic it should have stayed on a fucking university campus.
I’m sure a lot of work and thought has gone into this but I’m left wondering just who the hell is going to read this for pleasure? I found it really heavy going, too often to the point of tedium. Most of the authors have PhD after their name, others are University Lecturers or ‘Music Theorists’. They all seem to come from a music-loving background, but with the exception of Cogan in particular and a few others, none of them really translate that onto the page.
One for anoraks, students and, heaven help us, ‘Music Theorists'. (15.01.16) 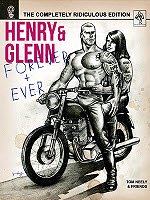 RY & GLENN FOREVER AND EVER: The Completely Ridiculous Edition - Tom Neely {320 pages, Microcosm}
Even as a kid, I was never one for comics. I read the zenith of all comics - The Beano - and that was all I needed. So, given that, it might surprise no one when I say I have never seen a physical copy of this infamous, cult comic that deals with the romantic relationship between Henry (Rollins) and Glenn (Danzig). The idea is simply fantastic: two of the most macho and self-obsessed figures in US Punk living together as partners. I’ve always questioned though, could reality live up to expectation?
Well, if I needed an answer, it must be here in this gargantuan collection that apparently compiles all the comics, jokes, artwork and stories that have made the series of comic books such a massive cult hit. On top of that are new stories and pin-up art.
To summarize the basics, Henry and Glenn are in this relationship in which Glenn has mother issues (think Norman Bates and Psycho) and is distinctly the more submissive and superficial of the two while Henry is very much the iconic, intelligent and dominant role. They live next door to Hall and Oates (yep, that Hall and Oates responsible for, appropriately, ‘Maneater’). Ian MacKaye also makes a surprise cameo appearance. From there, pretty much anything goes from multiple in-jokes about their own bands, general bitchiness, petty jealousy and many genuine laugh out loud moments. I have to say I was surprised at the amount of genuine laughs I got. Moments are lewd and crude, others surprisingly touching but the wit that runs through them all is pretty inspired.
It’s also apparent that Neely has a good understanding of both these individuals that goes beyond the obvious, and of the Metal and Punk scenes that they reside in.
The animation itself has a broad range of quality from intricate to basic, but there is a senseof continuity through it that gels the whole tome together surprisingly well. Most of the animation is stark black and white ink drawings, although there are an additional 25 pages of full colour cover reproductions of the original series that are sharp and add to the aesthetic appeal.
Aside from there, Rob Halford of Metallers Judas Priest writes a rather odd introduction while Nick Green offers up a hilarious Secret History of Henry & Glenn Comics. And it’s all bound in a heavy-duty hardback cover.
It’s been interesting to read the fallout comments from both of the book’s stars. Rollins, although having never seen a copy, seems to appreciate the humour and grasps the fact that his own persona is ripe for a send-up. Win!! Danzig on the other hand, being the miserable curmudgeon that he always seems to be, derides it as "very crappy and opportunistic". Lose[r]!!
From my own perspective, I believe the idea is inspired and has been executed in a way that just about lived up to the expectation of the myth. That’s particularly impressive given the very strong possibility that this could have been a major fail on many levels. Not too sure how many times I’ll come back to this - most likely when I dig out ‘Earth AD’ or ‘Do It’ - but I know those times will give me genuine smiles and loud laughs! (20.11.17)