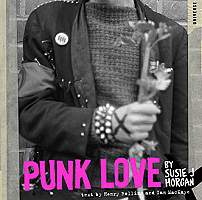 PUNK LOVE - Susie J. Horgan (130 pages)
This is one of those photo-journals/ visual snapshots of a specific place and time: DC in 1980. Its a lovingly presented tome; hard-back cover the size of a 7" single sleeve neatly juxtaposing stark black and white imagery with harsh dayglo colouring, glossy pages, high quality print job and a stylised simulated masking tape binding.
Horgan arrived in DC in 78 and hooked up with Henry Rollins via his employing her at the Häagen-Dazs ice-cream store that Rollins managed. From here she met Ian MacKaye and proceeded to document the DCHC scene for a period. Her work includes the TEEN IDLES record sleeve and the first MINOR THREAT release (the classic shot of Alec MacKaye on steps, head lowered to his forearms).
The book features - almost exclusively - Rollins and MINOR THREAT. You get a whole chapter of shots of general tomfoolery from Haägen-Dazs + another entire chapter of Ian MacKaye riding a skateboard. Intimate and rare shots maybe but do they warrant repeated looks? Um.... Not really.
The final chapter takes up over half the book and provides the most revelling and interesting photos. These are shots from shows at DC Space, 9:30 Club and Wilson Center. Its not so much the live band photos that display the intensity of the era (although the shots of BLACK FLAGs Dez and Chuck exhibit a defined dark ferocity), but the photos of the attending crowd hold the real allure. The faces are all young and glow with the excitement, passion and a vague arrogance of being part of something not just new but epoch-making. Theres also a decidedly apparent sense of community and unity about a lot of the crowd shots.
Other bands featured include GOVERNMENT ISSUE (the photos of which indicate a savagery most others lack), YOUTH BRIGADE (DC), RED C, STIMULATORS and BLACK MARKET BABY.
Henry Rollins writes a foreword and there is also a transcription of an interview/ discussion conducted by Ian MacKaye with Horgan.
The negative of the book is the over reliance on MINOR THREAT and Rollins/ SOA. While many of the images remain rare or never-previously-seen, both acts have a virtual plethora of shots already out there. Bands like SCREAM, BAD BRAINS, THE FAITH and VOID would be equally worth space, be equally as valuable historically and make for even more interesting viewing. Horgans limited time in DC (this book covers a mere year) may explain the omissions.
For me, as a photo journal, it really doesnt come up to the standard set by the great Banned In DC. There is little in the way of accounts from those who participated in the actual events the book documents. Its subject matter, while specific, fails to capture the scene entirely and while it does provide some captivating imagery, it lacks the depth to make for a really substantial and satisfying read.
For those obsessed with MacKaye and Rollins, its essential. For those into DCHC as a whole, its merely interesting on a curio level.