RAMONES: THE COMPLETE TWISTED HISTORY - Dick Porter {Plexus} (160 pages)
I find it amazing that there has never been a concise, in-depth look at what must be one of THE most influential American bands of all time. Sure, Everett Trues Hey Ho Lets Go and Jim Bessmans An American Band are good while Monte Melnicks On The Road (reviewed elsewhere) is probably the pick of the insiders perspective but really, a 500 page account should be in the making somewhere. This 160 page effort lacks the substance of all those mentioned above and, disappointingly, includes too many errors to be a really credible read.
The book starts in fine form with Porters writing being descriptive and scene-setting. The New York of the early 70s is documented, with IGGY AND THE STOOGES also getting a full overview due to their influence on the fledgling RAMONES. Each band members history gets looked at and from there it is a chronological appraisal of the bands career.
While some of Porters narrative is hit and miss, there are a few nuggets here. When the band arrives in London for the first time just as Punk Rock was exploding throughout the capitals disillusioned youth, Porter makes the well-observed comment that the RAMONES were not born of Punk but influenced what Punk became. Elsewhere, from the Too Tough To Die era with the bands foray into anti-Reagan political dissension, Johnny states, "I think Punk Rock should be Right Wing." The End Of The Century chapter was enjoyable, bolstered by the antics of Phil Spector and Markys spiralling booze problem. Porters detailing of Joeys passing was imbued with empathy and tastefully written in general.
I have to say though, I thought Porter was incredibly dismissive of CJ. He receives several desultory comments which, to anyone who saw the band with CJ, are completely unwarranted. Porters damning of the excellent Were Outta Here album does him no favours either.
Im not going to list all the errors evident within the book, but as an example, page 19 shows a photo of Dee Dee from May 77 according to the caption. Take a closer look and youll see the badge on his leather jacket shows the cover of the 1980-released End Of The Century album AND the words.
Id really have to debate whether Porter ever met any of the surviving band members as he researched this book. It certainly doesnt suggest he did as he lifts quotes from a number of publications and websites. I would also debate whether he is a fan of the band, or just a music hack looking to make a few quick and easy bucks. (03.01.10) 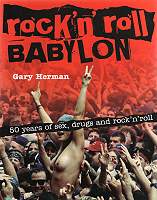 ROCK N ROLL BABYLON - Gary Herman {Plexus} 352 pages.
With the subtitle of, 50 years of sex, drugs and rock n roll, it should be clear what this book revolves around, although that subtitle should include violence and death also. This print is actually an updated version of the book of the same name that was released in the 80s. It should be made clear (as you should be able to deduct via the subtitle!) that this is not a book about Punk Rock specifically. Given the subject matter, Punk obviously plays a big part, but this goes back to the 50s and analyses the development of decadence in what is surely the most decadent of all arts.
Herman doesnt present his findings chronologically - and that is one of the main benefits of the book. In fact, it kicks off with the 1967 Monterey Festival and hippiedom. Instead, Hermans chapters draw together loosely-connected incidents so the book is neither genre or era specific. It does the book a disservice to recommend particular chapters as its an engrossing read as a whole, but the Blinded By The Light (religion and sacrilege in Rock n Roll), Stage-door Sex (groupies), Sex Drugs and Rock n Roll (self-explanatory, and a chapter in which SID VICIOUS is regularly mentioned) and The End Of Music As We Know It (a study of the 80s and the transfer of music into a commodity), were all a joy to read.
This being a broad sweep of Rock n Roll hellraising rather than Punks own debauchery, its obvious that the likes of POISON IDEA, DWARVES, TSOL and CRASS are over-looked. Oddly though, there is no mention of THE RAMONES (Im sure Dee Dee and Marky alone could have filled the entire book) or GG ALLINs gutter-depravity. Other surprising omissions include BEASTIE BOYS, HAWKWIND and GARY GLITTER (unless that would just be bad taste?).
Additional to the text is a wealth of photos, some seen often (Johnny Rotten on a crucifixion cross, the Hells Angels breaking heads at the ROLLING STONES Altamont show, a bloated Jim Morrison being arrested in Florida less than a year before his death) while others are relatively rare and revealing. Aesthetically, its a well laid-out book keeping attention-grabbing, sound-bite comments to a minimum.
Hermans telling of Rock n Rolls hedonistic heroics is very astute. By its very nature, the subject matter has (arguably) already been sensationalised in other media and by personal retelling. Herman does not add to that. Rather he reports on the outrage, throwing in his own perspective which in various levels is informed, witty, ironic, lateral and occasionally scathing yet never tabloid-hack gossip-mongering.
A totally enjoyable read of a world full of gritty realism, lewd prurience, self indulgence, all manner of casualties and a virtual other-worldly surrealism. (03.01.10)

Hit HERE for material reviewed prior to 2009 including:
RAT SCABIES AND THE HOLY GRAIL, THE REPLACEMENTS: ALL OVER BUT THE SHOUTING - AN ORAL HISTORY