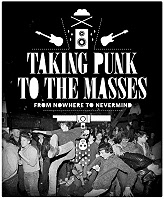 TAKING PUNK TO THE MASSES: FROM NOWHERE TO NEVERMIND - Jacob McMurray (256 pages, Fantagraphic)
I won’t hide my scepticism; a book that charts the progress of Punk through to Grunge gets published in the very year NIRVANA’s infamous ‘Nevermind’ album receives media overkill due to its 20th anniversary. The phrase ‘cash-in’ almost ran riot through my head but was prevented by one thing: this is published by Fantagraphics Books - a publisher that invests a great deal of love into its publications and retails them at incredibly low, value-for-money prices. Anyone who saw the excellent Destroy All Movies!!! book can testify to that and this engrossing tome is no different.
The book documents the musical topography of America’s Pacific Northwest, and that of Seattle specifically, via its analysis of the collection at Seattle’s museum of music and popular culture that is the Experience Music Project. The result is an ingenious composite of coffee table, tour guide and historical reference books.
Dating back to 1961 and looking at the Neumann microphone that the KINGSMEN used during the recording of the classic ‘Louie Louie’, each object is observed in both photo form (and the photos are of an excellent quality throughout) and text form. Text is split into two parts, with McMurray giving an historical overview of the item followed by comments from those directly involved with, or who were directly influence by, the article in question. What else is highlighted? The Gibson SG guitar used by Greg Sage of THE WIPERS, the cash box from The Masque, hand-written NIRVANA lyrics, the master tape for MUDHONEY’s classic ‘Touch Me I’m Sick’ single, SOUNDGARDEN’s tour van, HUSKER DU’s ‘Zen Arcade’ artwork, REPLACEMENTS’ live debut in Seattle, Greg Ginn’s lucite-bodied guitar plus a myriad of Sub Pop paraphernalia, flyers and oddities. It sounds a little obsessive, but the information is presented with verve (and a few chuckles) and it informs.
McMurray himself is a curator at the EMP, has a seemingly endless love of music in general and provides an introduction while Krist Novoselic offers a foreword, providing the book with a stamp of recommendation from one on the most significant of the Grunge Glitterati. The book is beautifully bound, printed on high quality gloss paper and just shouts "Style" in every way.
This is more than a mere book though. Tucked in the back sleeve is a two-hour DVD featuring interviews with such luminaries as Ian MacKaye, Henry Rollins, Keith Morris (who makes the excellent analogy that Punk Rock is like "Sex... without the sex."), Exene Cervenka, Grant Hart, Joey Shithead and Bruce Pavitt (really, if those names mean zilch to you - google them! Do your history!!) along with over two dozen others. McMurray also provides a visual introduction to the DVD.
I assume there will be naysayers who may state it focuses too much on NIRVANA/ Sub Pop at the expense of Punk Rock in its formative days while NIRVANA freaks may say there’s not enough eulogising of the Cobain legacy. In reality, those who are obsessed, or those who even fleetingly enjoy Punk, Grunge, Hardcore or Indie Rock will get a great deal out of this, both on a sheer enjoyment and educational level. Put simply, this hard to fault on any level. (22.01.12)

THIN LIZZY: The Boys Are Back In Town - Scott Gorham and Harry Doherty (180 pages, Omnibus Press)
Of all the Hard Rock bands (note: not fucking Heavy Metal!!), THIN LIZZY hold a particularly special place in my heart as they were the first band I ever saw live. I remember getting the ‘Killer On The Loose’ 7" sometime in 1980 and come the time of the band’s farewell tour of 1982, I went along to the Ipswich Gaumont and promptly got my proverbial socks rocked right off. To this day, after many years of gig-going, that gig is still among the best I’ve attended.
Unlike many band biographies, this has a totally authentic feel to it, being co-written by the band’s long-term guitarist, Scott Gorham, and music journo Harry Doherty who, back in 1977, was asked by the band’s leader, the late Phil Lynott, to write a book about the band. Given that pedigree, there is no doubting that this has been written from inside the band’s walls.
It’s a solid, informative but not overtly intrusive look at the band’s history. It kicks off in 1969 with the meeting of Lynott and original guitarist Eric Bell via the ‘show bands’ of the Dublin music scene of the day. From there, the band’s story is well documented, be it a jinx existing on the band for many years in cracking America, through to the recording of the epic ‘Live And Dangerous’ album, the ultimate break-up of the band, Lynott’s passing and Gorham’s efforts to rejuvenate the band’s history for today’s gig-goers.
In many ways, it’s actually a rather tragic tale of an incredibly talented songwriter. Lynott’s (and Gorham’s) unyielding descent into drug addiction is ultimately catastrophic. Songwriting, performance and recording all suffered due to addiction. Whether it was the drugs that made Lynott a man of seemingly split personalities is not completely justified, but it is certainly suggested. His fractious relationship with Gary Moore is highlighted but, it appears that at the end of all the LIZZY trials and tribulations, it was Gorham who Lynott would continually look to for support. Thankfully, Gorham had the foresight and reason to get his life back in order.
Another aspect of the band, and more specifically Lynott, is their alignment with Punk. There’s a great story about playing with BOOMTOWN RATS in Belfast and being set upon by the British Army. The band’s links with the PISTOLS and Chris Spedding via THE GREEDIES is also well documented as is Lynott’s vocal support and interest in Punk.
While the narrative may appear sparse, it’s actually fact filled without any sense of sensationalism. If anything, I think Gorham could possibly have down-played some of the more raucous events that beset the band. It’s also good to read that while he is honest about the other LIZZY guitarists, there is no denigration of them as people or musicians. I did find Doherty’s text got a little muddled at times, leaping albums and then back tracking. A minor quibble, but one that did see me flicking back through previous paragraphs and even chapters in some cases.
Visually, this is excellent. There are a lot of previously unseen photos, printed on quality shiny paper both in glorious colour and stylistic monochrome.
I think this could easily have been a book that languished in the band’s own myth, ego-centric and even a caricature of its legacy. All credit should go to Gorham and Doherty for writing a book that is the exact opposite: down to earth, sincere, intimate and, most importantly, interesting and informative. An excellent document of one of Rock’s best. (08.07.13)

THIS MUSIC LEAVES STAINS: The Complete Story of The Misfits - James Greene Jr (198 pages, Rowman And Littlefield) For such an influential band with an undeniably contentious history laden with rumour, lawsuits, ego, violence and intrigue, it's almost impossible to think that THE MISFITS story has not been told in book form before. However, as far as I know, this book is the first in-depth telling of the seminal Horror-Punks outta New Jersey. Naturally, it being the first, there is little to compare Greene's narrative with. It is also a narrative that, while factual, has a few too many inaccuracies and too few exclusive interviews to be the gripping read I - and no doubt many other MISFITS fans - had hoped.
It starts well enough, with Greene looking at the history of New Jersey and setting the scene for which the members of the original line-up spent their adolescence. From there it progresses through the formation of the band, its successive members, the break of the band and what happened afterward - including a look at Danzig’s SAMHAIN and DANZIG projects, Only’s reformation of the band and also Bobby Steele’s THE UNDEAD. Each release by THE MISFITS is analysed and important gigs discussed. It’s a factual read and one that taught me a few things I didn’t know about the band, so that’s a bonus.
One of the best aspects of the book is that Greene doesn’t side with Danzig or Only in their battle of egos and doesn’t shy from straight talking about either Danzig or Only. He examines both characters' idiosyncrasies (Read: Egos - and big ones at that), the hypocrisy that exists between comments usually said to appease their own ego or acts of downright stupidity.
The main negative of the book is one that cannot be overlooked: Greene failed to interview Danzig, Only, Doyle and Steele for the book. I’m sure he tried, but no doubt egos got in the way and left Greene having to use already printed quotes and snippets to back-up the story. Post-Danzig vocalist Michale Graves is the most notable ex-member who did an exclusive interview, along with Frank Licata and Jim Catania. Others interviewed include the likes of Ian Mackaye, Brian Baker and Martin Eric Ain. Greene’s lack of scoring one of the band’s major names does, unfortunately, lend this an unofficial feel.
Maybe as a result of the above, this is a short telling of the story. While the book may clock in at around 200 pages, the actual narrative lasts just 120. The book is filled out with an excellent discography, detailed notes on the origin of much of what is printed, films that influenced the band and the obligatory preface, acknowledgements and index. For such a visual band, pictures are also at a minimum - we get just seven monochrome shots from a 1983 gig with Robo on drums.
I might be over-critical here, but some of Greene’s descriptions of the UK Punk scene is widely inaccurate also. Talking of THE MISFITS’ UK tour in ‘79, he claims THE DAMNED, a band in the wake of the excellent ‘Machine Gun Etiquette’ album, was a "keyboard driven rock band," while THE CLASH (two albums down and ‘London Calling’ imminent) was mere a rising British Punk band.
Small criticism maybe, but it does suggest the book has been written by someone lacking a sincere knowledge of this Punk Rock thing. Ultimately though, this is a much welcomed telling of a band’s story that has long-been required. Greene’s telling is factual and unbiased in either Danzig’s or Only’s favour and that makes it a balanced read. Whether this is actually the best book that will ever be written about the band remains to be seen - if Danzig or Only ever decide to detach themselves from their own ego to write their version of the story, then the balance of this book will most certainly be lost. (31.08.14)