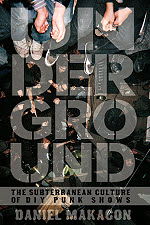 UNDERGROUND: The Subterranean Culture of Punk House Shows - Daniel Makagon {228 pages, Microcosm}
Most of us have attended one (or several) in our journey through the world of Punk - the house ‘show’. Gigs that are staged at someone’s house, in someone’s basement or garage - maybe in the guise of a party, other times as a bona fide gig-going experience complete with some kind of cost. I am sure even more of us have attended gigs at community halls or the backroom of a pub where a single person, or a collective, has staged a gig free from any corporate involvement. This book looks at the history of DIY gigs, and specifically, those of the ‘house show’.
The book goes back to the original Decline Of The Western Civilization movie and the destruction at various early Californian Hardcore gigs before moving on to examine the benefits and negatives, pitfalls and successes of hosting a gig in a space that was not initially designed to hold a gig.
Multiple collectives and individuals are interviewed, all of whom have staged their own shows in houses. They discuss matters ranging from whether there should be a door charge or a collection of donations, whether such gigs should have a guarantee for any travelling band (and several good arguments are put forth from both sides), interaction with the neighbours, interference from the police, whether alcohol should be at such shows and, if so, does that make for a better experience, how best to promote a house show while trying to avoid alerting any authorities who may try to shut it down and the mental and physical joy/toll (depending on the viewpoint) of having shows and strangers in your house and the chaos and destruction that sometimes follows.
Besides the above issues, the book also serves as a pseudo guide on how to do your own house show and highlights the apparent life-long friendships that have developed between those who host the shows and the bands that perform at them. It frequently reiterates the social aspects of hosting house shows and how, when done in the correct manner showing respect to bands and promoters, a local Punk scene can be born from seemingly nothing but dedication.
A lot of quotes are taken from Maximum Rocknroll interviews and columns, and the infamous Book Your Own Fuckin’ Life directory plays a big part too. Of community spaces, both Gilman Street and more specifically, ABC NO RIO are used as prime examples.
Makagon’s narrative does come over in places as if you are reading some kind of essay or listening to a lecture rather than reading about DIY Punk Rock. Given the fact that he is an associate professor in the College of Communication at DePaul University, then that comes as no surprise. However, he has attended plenty of these shows himself and it does have a first-hand authenticity about it, but just lacks a bit of sparkle. And, he has the annoying habit of starting a new sentence with ‘and’ (just like this one).
The book is filled out with some photos of bands playing house shows, many of which capture the intensity and claustrophobic nature of such gigs. Bands photographed include COPYRIGHTS, LEMURIA, ICONOCLAST, CAP’N JAZZ, CAREER SUICIDE, LOS CRUDOS and SPITBOY.
As said, the narrative is a bit dry in places, and I found it lacking in direction occasionally, but as an analysis of relationships within Punk spaces, Punk economics and the creation of communities within the DIY nature of house shows, this stands as a worthwhile read. (20.12.15)

UNDER THE BIG BLACK SUN: A Personal History Of L.A. Punk - John Doe and friends {306 pages, Da Capo}
You don’t need to be a complete Punk Rock anorak to know that the original Punk scene of Los Angeles, and the Hardcore scene it mutated into, is one of the most influential of anywhere ever. Names like GERMS, X, WEIRDOS, GO-GO’S, and onto BLACK FLAG, CIRCLE JERKS, T.S.OL. are infamous and quite rightly so. This book looks at the founding years of that scene, compiling narratives from a number of people who were there at the time, living and breathing the excitement of the era, and is curated by John Doe of X.
So, I guess you wanna know who contributes, right? OK - John Doe does a number of pieces along with Exene (of X), Jane Wiedlin and Charlotte Caffey (GO-GO’S), Mike Watt (MINUTEMEN), Robert Lopez (ZEROS), Chris D (FLESH EATERS), Dave Alvin (THE BLASTERS), Jack Grisham (T.S.O.L) and Henry Rollins (you should know) among others.
Each chapter works in its own right, focusing on a specialised area from each writer. As a collection, they create a comprehensive narrative that takes in all of those early LA legends - the Canterbury apartments, The Masque, Slash zine and label, the legend of THE SCREAMERS, Darby Crash, the passing of Exene’s sister via a car accident right before the band is due to take the stage at the Whiskey, the influence of THE DAMNED being the first UK Punk act to play the city, Pleasant Gehman’s parties and the advent of Hardcore and the violence that ensued.
There are certainly chapters I enjoyed more than others. All of John Doe’s pieces read like a noir film; his writing is incredibly stylized, panoramic and informative. Pleasant Gehman’s piece is another wonderfully written narrative that’s laden with insight and humour. It’s the chapter from Chris D however that I really enjoyed. Besides being in FLESH EATERS, he was also heavily involved in Slash and writes with flair and style. Jack Grisham’s piece is also one that stays in the mind, mainly as he apologizes for his delinquent, assaultive past but is totally unapologetic for bringing violence to that early LA scene. Like his American Demon book, it’s a startling narrative, unflinching and bristling with something dark and explosive.
I could’ve done without another piece from Rollins; we’ve all read and heard his opinions far too often now and his chapter here is nothing new. I think the book missed out on collecting the thoughts of a few other notables like Alice Bag (of THE BAGS), Leonard from THE DICKIES, someone from THE WEIRDOS, Joan Jett and maybe even Captain Sensible to relive that ground-breaking appearance of THE DAMNED in LA.
The book is filled out with 50 high quality photographs spread over two glossy paged sections. Some have been seen before, many haven’t. The narrative is also filled out with assorted gig flyers.
It’s easy to be critical of such collections given the benefit of hindsight from an armchair reader’s perspective. Fact is, this is the most complete and in-depth look at that initial LA Punk scene yet. Sure, the oral history We’ve Got The Neutron Bomb featured more names, but none were quoted with such depth as the pieces here allow. Doe has collected a group of people who actually know how to write and write with flair. These writers also compliment each other when collated into a whole.
This is an informative and exciting book to read, transporting the reader back to a time of individuality and abandon the likes of which will most likely never be seen again. It’s deftly written, beautifully presented and makes the reader yearn for a time machine so they too could walk down the stairs and descend into the decadent world at The Masque, party at the Canterbury and be terrorised by the live experience that was THE SCREAMERS. Any book that can do that has to be pretty damn good. (25.07.16)