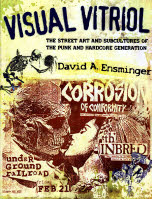 VISUAL VITRIOL - David A. Ensminger (348 pages, University Press Of Mississippi)
Subtitled, The Street Art And Subcultures Of The Punk And Hardcore Generation, this coffee-table sized book is an in-depth analysis of what was (and is) an integral part of the Punk movement: the flyer. However, that is a rather simplified version of what this exemplary tome offers.
Split into nine expansive and informative chapters (plus an introduction, conclusion and afterword), the book encompasses Punks history - from '77 and the CLASH through to the early 80s USHC and UK Anarcho movement and onto todays more corporate world. What sets this historical telling apart from the likes of American Hardcore, or Please Kill Me, is that rather than simply look at things chronologically (or geographically even), this looks at individual niches within Punk - be it women, gays, hispanics, race, skateboarding and the influence of horror - and applies them all to how they influenced and evolved the humble flyer from its basic origins of simple, spray-painted graffiti (and, of course, BLACK FLAGs legendary graffiti throughout LA), the stencil work of CRASS and onto the inspiring art that adorned USHC flyers that were political, witty, gross and inventive and often all at the same time. These flyers have become something Ensminger has even developed his own subtitle for: The Second Skin Of Cities.
Naturally, a book that focuses on flyers would have to reproduce several. Visual Vitriol offers 111 black and white and 23 colour reproductions of flyers, predominantly (but not entirely) from American shows. These are full-page reproductions offering visual examples of what has been discussed in the preceding chapter.
Ensmingers narrative has a clarity, knowledge and, most importantly, enthusiasm for all aspects of this Punk Rock World of ours. That would be expected though, from this former editor of Left Of The Dial zine, Maximum Rocknroll contributor and teacher of English. The other strong point about his narrative is that he has the experience to write first hand about his experiences with the likes of Randy Biscuit Turner (BIG BOYS), John Stabb (GOVERNMENT ISSUE) and NOFX. That kind of grass-roots love of Punk Rock is something a Career Music Journalist can never duplicate, no matter how sensational or descriptive they make their words. But do not expect this to be an easy read; Ensminger has collated a lot of information here and analyses it from a fresh viewpoint, intelligently elaborates on his ideals and deftly highlights critical connections within our Punk world that has kept it functioning with heart and sincerity since the 70s.
Undoubtedly, this draws comparisons with Fucked Up And Photocopied, but where that remains a definitive Punk Rock Coffee Table book, Visual Vitriol offers an incisive treatise on the evolution of Punks graphic stylisation and a narrative that can teach and inspire those of us who are veterans of Punk Rock, and those who are coming to it with new eyes open. (14.05.12)