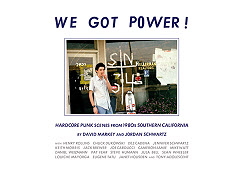 WE GOT POWER! Hardcore Punk Scenes From 1980s Southern California - David Markey and Jordan Schwartz (308 pages, Bazillion Points)
Considering just how intense, rebellious, unflinching and downright ugly the original USHC movement was, its testament to the skills of Markey and Schwartz for making this book look absolutely beautiful. 304 glossy, perfectly printed pages lay in landscape form between two embossed, virginal white hard covers. Just the sheer aesthetic quality of the book entices the reader to discover the content of those 304 pages. The question is, does the content live up to the aesthetics?
The answer is a resounding yes. Like the recent Touch And Go book (also printed by Bazillion Points), We Got Power! was originally a zine from early 80s LA. It only lasted for five issues and they all get full reprints here, along with the unpublished sixth issue. Typical of zines of the day, it was a cut n paste job, rife with humour, typewriter-generated and, most importantly of all, the writing had an urgency and captivation about it that matched the high-octane sounds it was writing about. These zines are fascinating time capsules of a long-gone, epochal era where Hardcore was resolutely linked to Punk and the printed word was the only source of musical discovery.
Unlike the Touch And Go book that was 95% reprints of the zine, the strength of this comes in previously unseen photographs and via contributions by guest writers. These writers are icons of the era too - Henry Rollins, Chuck Dukowski, Tony Adolescent, Keith Morris, Dez Cadena, Mike Watt, Jeff and Steve McDonald along with many others plus Schwartz and Markey weigh in with a couple of excellent pieces also. What makes the writing so captivating is the fact that it isnt written by some music journalist or sepia-eyed historian. These people were the people who MADE the scene, they were there living and breathing it. The fact this compiles so many of those originators gives the book a 100% authentic and authoritative tone that the likes of American Hardcore (as good as it was) lacked.
As for the pictures, there are over 400 colour and monochrome photos reproduced in stunning clarity on high-quality gloss paper. The landscape format of the book allows the reproduction of these photos to become a work of art in itself; some take a full page, others stretch out over the centre fold while others put four photos on a page creating a virtual mini-story of an event. The photos are not just of bands, but also of unknown faces who made up the LA Hardcore scene and infamous locales and venues - Oki Dog and, more specifically, some photos of The Masque taken by Markey and Dez Cadena when they broke in long-after the club had closed.
I could give you specific highlights but every page is a highlight with new images and new words about a legendary period in the development of Punk Rock.
Negatives? Oh fuck - how can I be negative about something this enthralling? I guess if I was going to be critical, I would say I would have liked to have seen a contribution from Jack Grisham of T.S.O.L. Its apparent a few of the bands in the book had a vague anti-T.S.O.L stance and it would have been interesting, given hindsight, to see how Jack would respond. That really is not a negative though - just an observation.
For anyone with the slightest interest in this era of Punk Rock, I cannot recommend this enough. Its kept me transfixed for hours at a time, and also works well as a coffee-table style book where you can pick it up for five minutes and still get something out of it. And if this IS a coffee-table book, its the best one I have ever seen.
Essential in every way. (04.12.12)