Interview: Nathan Grice - Dead To Me

Hailing outta San Francisco comes DEAD TO ME, a band formed out of the ashes of ONE MAN ARMY and WESTERN ADDICTION.  The band recently released its second album, 'African Elephants', on Fat Wreck and this is what the band's newest recruit, guitarist Nathan Grice, had to say.

..OK - tell us how the band got together. I heard Jack formed DEAD TO ME before ONE MAN ARMY officially split, but I also heard that Chicken, formed the band - what's correct? Does Chicken's involvement with DEAD TO ME signal the end of WESTERN ADDICTION?
..Nathan) I'm not sure if Jack started the band before ONE MAN ARMY split but I do know that Chicken and Jack started DEAD TO ME. I think it was after ONE MAN ARMY broke up. You may want to check with Chick. As for WESTERN ADDICITION, I don't think they ever technically broke up, just some members of the band had children and moved on to family life.

..What are you hoping to get out of DEAD TO ME?
..Nathan) DEAD TO ME's goals are to write good songs. Play good shows. Get better and doing the only thing we like doing which is playing music. If things don't move forward there is no point.

..Since the band formed in 2003, former ONE MAN ARMY member and (apparent) DEAD TO ME co-founder Brandon Pollack quit the band. Why did he leave and how did you, Nathan, hook up with the band to replace him?
..Nathan) I don't know why Brandon left DEAD TO ME. Maybe he didn't want to tour. He owns a business also. Maybe thats why. I met Chicken in Richmond, Virginia where I used to live and where WESTERN ADDICTION was playing with NEW MEXICAN DISASTER SQUAD. They all stayed at my house. Then a few months later I was asked to play with DEAD TO ME for a tour, but then somehow I ended up being a permanent member. Funny how things work out.

..Since the recording of the 'Little Brother' EP, Jack Dalrymple has left the band. Why did he leave? Did DEAD TO ME consider splitting up at this point? I've read that he may come back to the band somewhere in the future - that true?
..Nathan) Jack left the band because he was having a child with his wife and he decided to focus on that. I don't think Jack will ever come back to the band. I thought the band was going to break up, but then Chick and Ian talked me into writing songs for the band and learning to sing. So it took some work but things are working out for the better now. 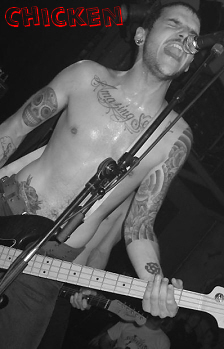 ..The band has just released the African Elephants album. Was the writing of the album approached in a different way now that Jack has left?
..Nathan) Writing African Elephants was as simple as just going to practice every day and not putting any rules on ourselves. I have never written a "Punk song" before so I wasn't sure how to adapt the songs I make up at home to a loud rock band playing them. But Chicken was bringing great songs to work on and Ian was playing better than ever so I had to keep up. We just played every day and tried different styles than we usually play. Eventually we had songs and we recorded them. Im ready to record again.

..Id like to ask about a couple of songs on the disc, starting with 'Three Chord Strut'. It's a song that suggests, in its last verse at least, that there is only a new US President because there had to be, and that the problems of state/ society cannot be assumed to improve just on the strength of the one person - Obama. Can you tell us the idea behind the song and the relevance the title has to the subject matter?
..Nathan) The song Three Chord Strut I made up without really thinking about. The last verse is kinda about Obama, but I think its about something else that I will keep to myself. But a lot of people think Obama when hearing it and ask me about it. I was kinda thinking about myself and how I need to take control of my life and not complain all the time. But its up to the person listening to the song to decide what it means; maybe they could tell me.

..A lot of the lyrics tackle political perspectives without resorting to minimalist sloganeering a la Smash The State. Do you feel politics is integral to Punk Rock - or is the banality of a Fuck the Government rhetoric so clumsy it can be embarrassing?
..Nathan) Chicken is really good at writing political songs but he does it through a story or personal feelings; not cheesy slogans. I don't really care for politics and I don't like anything about them. But I have to say I learn from Chick. He reads A LOT.

..DEAD TO ME did a video for the song Special Professional which was shot on the streets of San Francisco. What are your thoughts on the video making process? You have any other videos lined up?

..Nathan) I wasn't in the Special Professional video. DEAD TO ME hasn't made another video since. We got a lot of ideas if anyone wants to make a new video for us.

..How has the live reaction been to DEAD TO ME? Do you play any covers live? You played at Floridas The Fest yeah - how did that go? You done anything like a Warped tour yet? Do you prefer playing those festival deals, or the more intimate, in-your-face club shows?
..Nathan) The shows we play always end up being really fun. We don't have any cover songs we play on a regular basis but in the past we have played LOVE's Little Red Book and THE RAMONES I Wanna Live. The Fest was awesome per usual. We have not played Warped tour. I don't think I want to, but the band is a democracy so ya never know. I don't like being burnt by the sun out on a huge parking lot with a bunch of Nu-metal Emo bands playing; doesnt sound like much fun to me. I prefer a small club show any day to a large festival  unless the bands on the festival are awesome and I could see good music while being there.

..Have you ever thought about moving away from the city? In what ways do you think you as a person would change?

..Nathan) I think about moving all the time. I want to move to Ashville, North Carolina or New Orleans; or Berlin. It may change the music but I like change in music and I need change to survive. I hate doing the same things too long. Maybe one day I will move.

..A fun question: You have the chance to be mega-stars for just ONE hour, which happens to be the hour before you play a show at Gilman Street. What would you request as a pre-show rider and what would you organise for the Gilman show to make it truly memorable?
..Nathan) If we were mega-stars or whatever I would ask for tiger meat on the rider for the Gilman show, and I would get Einsturzende Neubauten to play the show with us. And I would be allowed to smoke inside. ..Whats next for the band? Any overseas touring planned?
..Nathan) Up next for the band... Lots of songs, better songs or worse songs. Lots of shows. Touring in Europe in the fall of 2010. NEW records!! Hopefully we will find a reason to be living. Thanks for the interview; hope my answers make sense in some way.