Formed back in 1981, PARANOID VISIONS is Dublin's longest running Punk band - and one of the city's most impressive. Having just released the mammoth new album, 'Escape For The Austerity Complex' on Overground Records, Trev HAGL caught up with guitarist P.A. for the interview below. Photos provided by P.A. and borrowed from the band's Facebook page. 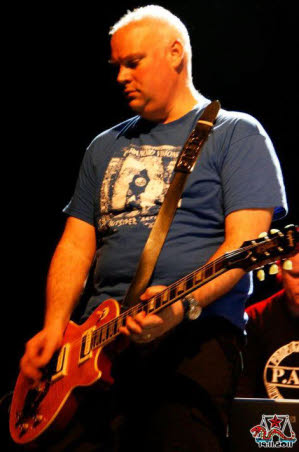 ..I didnt realise how big you are in Ireland until I read the album promo sheet which says you got to No. 6 in the charts!! How the fuck did THAT happen? You just wouldnt see that in the UK!
..P.A.) PARANOID VISIONS is a highly political and serious Punk Rock band; we have operated autonomously for 30 years and fully subscribe to the DIY ethos of true Punk Rock That being said, we do have a wicked sense of humour and a desire to mess with the system and subvert the music industry, if only to highlight the stupidity of it all.
Its well known that the charts are all a scam and are designed to perpetuate careers as well as launching careers. After a lot of research, I managed to suss the game out and operated the two releases in the same way as the major labels do, but with zero budget. Its all about stacking the odds in your favour and ensuring that people buy your product in the right shops. That being said, you still have to shift a decent volume of product, but we played the game and won. I would have sold my right arm to be at the meeting in Universal Records that morning when the question was asked, "Who the fuck are these and why are they one place ahead of Take That?".
If anything the chart success served to prove to the industry that Punk Rock was a viable source and should be taken seriously, but primarily it was a scam to show the charts up for what they are!! We did it twice, once with Der Election and once with Outsider Artist (the single with TV SMITH), which was particularly gratifying to have TV SMITH in the Irish Top 10.

..Any amusing incidents from telly, the press etc?
..P.A.) When Aoife came through Manchester airport with a knuckle duster belt buckle and started a full-scale security alert It hit the Daily Mirror in Ireland!
A couple of years back, we were invited onto RTE prime time telly on the Podge And Rodge Show. They had this piece where they got a band to fire a gun at a wheel of fortune type of thing and whatever song it landed on you had half an hour to learn and play live. It was of course a sham because the bands were given the choice a week or so before. However, nobody had chosen the Irish national anthem, so they rang us and asked if we would do it. It was hilarious - look it upon Youtube. The switchboard was jammed with complaints at the insult to the national anthem, "My granddad died in 1916 and these people shit on his memory" blah blah blah. Chances are it would have been a decent news story the next day, which is what RTE had hoped I think, but the Taoiseach resigned the next day - not related to our anarchic performance I hasten to add! ..How did you get to work with TV Smith, Zillah Minx, Steve Ignorant, The Shend?
..P.A.) We got introduced to The Shend by Overground Records and we are huge CRAVATS fans. Shend had been very supportive of us on his Spinning Man radio show (brilliant stuff btw), we asked if he fancied doing a track with us and he jumped at it. He did a second track thats on the Outsider Artist EP too.
We got to meet TV Smith when we put him on the bill at the Steve Ignorant show in Dublin. When he was coming back for a solo show we suggested playing some ADVERTS songs with him, we asked if he fancied singing on a track while we were in the rehearsal room We couldnt believe it when he said yes! Then Finn from MENACE and his other half filmed him on top of a building in Tokyo for the video!
Zillah is wonderful, so is Sid, so when I got cold feet about using a Leonardo Dicaprio sample on Poles Apart I just asked he if she wanted to recite it instead!
Steve Ignorant we got to know after doing three of the Last Supper shows. I was chatting to him about the problem we had trying to replicate his style of delivery for Split Personality and he suggested he come over for the weekend and record it with us. A truly surreal experience as there are not many people who are bigger CRASS fans than us. He did a second track with us for the forthcoming 7" on Louder Than War too and we are now working on plans for an EP with him. Its mad because no matter how huge he is in the Punk world, he just comes across as being so ordinary and unaffected that you tend to forget who he is until he says something like, "This is great, squashed into a studio with a few cans of lager, no bullshit. It reminds me of recording Stations Pen would go, quick Steve, get it first take we are running out of time," then you kind of go FUUUUCCCKKKKK thats Steve Ignorant singing our song!

..Any views on the Crass download argument and the site reportedly being ordered to be taken down by either the band or Southern? What about downloads in general? Is it frustrating that you and John at Overground put heart and soul into the CD, making it a great package, yet a load of shysters will still try to get it free?
..P.A.) Well Im 100% certain it isnt CRASS who are responsible. Bear in mind Crass Records officially went bust in the early 80s and were bought off the liquidators by Southern. I would imagine that the band themselves have no issue whatsoever with the mu 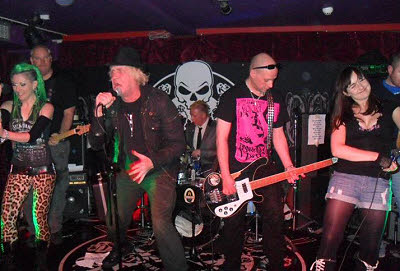 sic being available free.
As you point out, people put their heart and soul into producing a beautiful package, so the people who respect and appreciate that will have no interest in free downloads as its the tangible product they want to possess. Conversely some others either cant afford or have no interest in that aspect and just want the music. That being said Ive my own opinions on free downloads and streaming sites They are brilliant if a band uploads the material themselves and selects to give their music away. Anything else is taking a liberty.

..Ireland seems to be a carbon copy of the UK these days  a tyrannical govt waging war on the poor to pay for the mistakes of the bankers. Is it an official Tory govt or what, and what is the reaction on the streets? Have people finally stirred?
..P.A.) The Irish people, like the English, always take the politicians lying down. We will all piss and moan but do nothing, which is a shame as they are meant to be representing the people, but the people arent giving them direction. The Irish political parties are all basically Liberals. Theres still as much corruption and cosseting of the bankers who destroyed our economy, and with it the hopes and dreams of the next generation. Not one single politician in this country would cut it in private industry at a senior level. Whilst I hate the interference of the EU, the fact is our representatives are useless and as such need the headmaster to direct them; but like a lot of demanding teachers they do need to be challenged and stood up to and our current government are too weak and to inept to do so. Hence we are confined to austerity and effectively having the economy strangled for the foreseeable future.

..Have they managed to fuck the welfare state like they have in the UK?
..P.A.) Its not as bad as the UK, but they are making cuts in all the wrong places and doing zero to stimulate the economy to get people off the dole. ..Is there an Irish version of UK newspaper The Sun that turns ordinary people against each other?
..P.A.) The tabloids are equally as disposable, lazy and sensationalist as the UK versions but lack the bitter, evil, twisted angles that blights the UK media.

..Is there a climate of ignorance and jealousy like there is in the UK , where modern folklore says the unemployed get showered with cash and free Sky TV, especially those goddamn immigrants!
..P.A.) Yes there is, and as time goes on the division will grow.

..The cover of the CD, showing a noose, is quite apt considering that - in the UK - ATOS via Govt policy have helped to send 30 people to their deaths after being told they are fit for work. Was it this sort of thing you had in mind with the cover?
..P.A.) It draws a parallel between the only escape some people find and the way that austerity is economic suicide. The original front cover was the slit wrists version, but it was deemed unsuitable and chances are some retailers and iTunes wouldnt allow it!!!

..Is Dont Let The Rot Set In targeting Islamic extremists?
..P.A.) Not really. Its a song about how Ireland is meant to be land of 100,000 welcomes yet we welcome immigrants by ghettoising them and making no attempts to integrate them into all aspects of society. Educated foreign nationals have been coming to Ireland to find that their qualifications arent recognised and that there are no courses or exams available to legitimise their qualifications so they are being shoved onto the dole or in minimum wage jobs. The song says that we should know better than this, given that the Irish have colonised the world for decades and yet we do nothing but abuse the favours in return. We should have learnt from the "no blacks, no dogs, no Irish" signs in early 70s London. The song predicts that sooner or later those being abused will fight back as organisations - similar to the EDL in the UK - fuel the divisions sectarian violence ensues. The chorus is, "When in Rome, as the old saying goes, do as Romans do. But what the hell would Romans do if they were being abused?"

..I saw your post on Facebook taking the piss out of the part timers that frequent the Rebellion Festival once a year, but I think you played the fest? If so, what did you make of it? Did you come away as cynical? Any views on the dodgy gigs they have each year down the road? 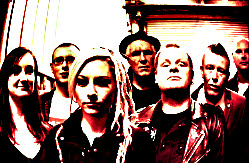 ..P.A.) No, that was Deko having a laugh at peoples expense. If you read it again you will see the tongue is firmly planted in the cheek. Rebellion is the best thing in our calendar, thousands of like-minded individuals and no violence. Terrific bands, terrific atmosphere and every year it gets better for us!