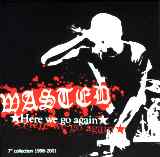 WASTED - Here We Go Again {Boss Tuneage} Huge 29-track compiling this bands first four 7"s + comp appearances. WASTED is part of the thrilling scene burgeoning outta Finland and clearly represent the Street Punk side of things, mixing a potent YOUTH BRIGADE style guitar assault with an all-out GBH style attack. The guys have an angry streak flowing through their veins also with sharply defined and often savage condemnations of the police, war, religion and social evils. In God We Trust is a viscous and malicious, high paced attack on religious wars while Suburban Kids offers a broader sonic dynamic. White Trash Disease sees the recording quality noticeably improve before the conformity mauling Not From Your World kicks in. The tracks from the 2001 7" display a fuller, more balanced sound but one which still spits vitriol. Three unreleased tracks and two CD-ROM videos set the disc apart from the usual deleted-material-cash-in.

WESTERN ADDICTION - Cognicide {Fat Wreck} A band consisting of three Fat Wreck employees releases its first album on - wait for it - Fat Wreck! WHAT a surprise! It'd be easy to be cynical about this 12-tracker, were it not for the fact that it's sooooo shit hot. This is fast, aggressive, spirited and bites with the same vicious ferocity as a pool full of piranhas attacking your scrotum. There's melody amidst the maelstrom also, with the general tone being a mix of CIRCLE JERKS speed, prime-time RANCID snot, AGNOSTIC FRONT muscle and just a splash of VERBAL ABUSE charm to round it off. 'Mailer, Meet Jim' and 'Face Cancer' take album highlights but, at a duration of just 21 minutes, the disc performs a hit-and-run before you realise it. Great lyrics also make WESTERN ADDICTION the real deal and not just 'best mates' of Fat Mike. Truly addictive.

WHITE CLOUDS & GUNFIRE/ DESTRUCTORS 666 - Caveat Emptor {Rowdy Farrago} The terribly named WHITE CLOUDS... kick off Part Two of this three part series of split EPs. The band plays a polite strain of Indie Rock thats comparable with Franz Ferdinand mixed with the cool swagger of the SMITHEREENS. Not bad - just forgettable. DESTRUCTORS do four tracks of their 82 tinged UK Punk kicking off with Electronic Church which is a fresh recording of an old song and is probably the best track Ive heard from the band thus far. Theres a FLAMIN GROOVIES cover and a hidden track that, I think, is another oldie reworked. Not the best of these splits (see the one with EASTFIELD for that), but in Electronic Church you get DESTRUCTORS 666 best moment so far.

WHITE DEMONS - s/t {Sonic Swirl} If it wasnt for all the goddamn guitar solos, this would be a pretty smokin record. Yeah, the solos are short but totally unnecessary in every song. Its very much rock, but rock in the sense of HANOI ROCKS sleaze, the pounding power of early AC/DC, early REPLACEMENTS chaos and a hint of IGGY. The band feature Tony Krank of Krank Amps. Tracks like Tear It Up, Cancelled Show, the closing Its All About The Rock and the title track really hit the spot that so many bands of this genre miss. Powerful yet ragged and raw enough to tell ya these guys know rock n roll should not be an over-produced science... Just cut those guitar solos by 65%, OK?